Presentation by Dr. Abdul Cader Asmal as a keynote speaker at Needham Mass, Diversity Summit on 10/18/13 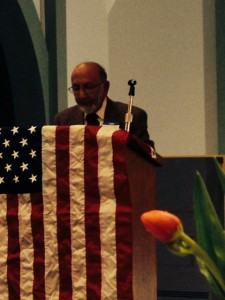 The following presentation made by Br. Abdul Cader Asmal recognizing Cultural Diversity was well received by many Council members and for this reason it is uploaded onto the website for wider distribution

I greet you with the traditional Islamic salutation, ‘May the Peace and Blessings of Almighty God be with you’.

I am deeply honored by this opportunity to address you on the subject of what it feels like to be ‘the Muslim other’ in today’s America. For its vision, inclusiveness and commitment to social equity I thank the Needham Community Education and Diversity Planning Committee for this invitation.

At the outset let me make it absolutely clear that neither I nor my family has ever felt unwelcome in our 33 years in this town. Needham has been a haven for us since we left the oppression of apartheid, and my sons excelled with the best of friends, needless to say all non-Muslim, as they worked their way through the outstanding educational system.
This does not mean that the US is Utopia. However, as a person who found refuge from apartheid I can appreciate with a keener sense the freedoms and opportunities that those born here too readily take for granted! And yet as one, as it were looking in from the outside, I can also detect its shortcomings and frailties.
The irony that first hit me on coming to the States was that whereas in South Africa I was classified as a second class citizen because of my race and color, my religion was never questioned. On arrival here I was astonished how ill-informed many Americans were about Islam, largely due to age old stereotypes and misconceptions. Over time these underwent a subtle transformation to a deliberate and exclusive scrutiny of Islam, and the packaging of propagandist disinformation. With the implosion of the Soviet Union a new bogeyman had to be found, and Islam looked perfectly set-up to fill the niche. Sure enough, as soon as our mujahideen allies who had helped to humiliate and vanquish the Soviets in Afghanistan completed their freedom fighter roles, they metamorphosed into the ubiquitous AlQaeda an avowed enemy of the West. The terrible events of 9/11 orchestrated by AlQaeda gave credence to views that it was on a quest to establish a ‘global Islamist caliphate’. Such rhetoric set the stage for endless fear-mongering tactics (Alex Kane), the initiation of the so-called war on terror (which became synonymous with a war against Islam) and the promotion of a lucrative Islamophobia industry (Nathan Lean). Islamophobia, defined as an exaggerated and irrational fear of Islam, did not arise in a vacuum. It arose because the once lionized mujahid, Osama Bin Laden concocted a fascist ideology of hatred and destruction. The heresy he propagated, that Islam justified the slaughter of innocent persons, be they Jews, Christians and especially Muslims who contradicted his deviancy, is totally antithetical to the fundamental values and beliefs of Islam.

Despite volumes of repudiation by the worldwide community of Muslims of the heresy and the terror it spawned, the ongoing acts of mindless carnage by Bin Laden clones, institutionalized the fear that Muslims were, and are conducting a global jihad to establish Islam as the civilizational norm.

With that background I will focus on 4 points for the rest of my talk:

1. Critique “What everyone knows about Islam”.

2. Review the parallels between anti-Semitic and Islamophobic statements.

3. Address the enigma as to how the atavistic AlQaeda could ever hope to conquer the world.

4. Express the personal angst that Muslims universally experience in the time of the ‘Global war on Terror’

1. ‘What everyone knows about Islam’ represent blanket unsubstantiated opinions that require no fact-checking, and help shape conventional wisdom. This is a partial list of a massive compilation.

2. This section selects 5 of 10 quotes which highlight the alarming similarities between the Islamophobic messages propagated by Robert Spencer and the anti-Semitic messages of Nazi propagandist, Julius Streicher. (Colm Obroin). The terms ‘Jews’ and ‘Muslims’ are used interchangeably.

1 Muslims/Jews have a religious duty to conquer the world *

The consequences of such virulent anti-Semitism are at least too well known.

3. Let us now analyze the phantasmagorical suggestion that the so-called ‘jihadists’ are out to conquer the world for Islam. In theory they could do so militarily, politically or ideologically.

a) Do they possess the wherewithal to do so in a purely military sense as once did the Soviet Union? With their ‘sophisticated pressure –cooker, shoe-bomb and underwear technology’ they are a persistent challenge to our sense of well-being, and may cause unpredictable mayhem and heartbreak, and we can never trivialize this, but do they pose any real danger to our existence as communities, nations, and civilizations?

b) Politically the Muslim world is not monolithic and is so fractured by internecine conflicts that it is in no position to even begin to contemplate the establishment of a caliphate.

c) Most importantly could the barbaric ideology of indiscriminate violence and anarchy of the BinLadenites appeal to any right -minded non-Muslims when it is rejected by the overwhelming majority of Muslims?

The answers to these questions are a resounding NO! To be a practicing Muslim – NO global caliphate is needed, planned, or possible!

4. I would now like to focus on the keynote of this talk – how does it FEEL to be a Muslim living in this climate of collective guilt -the personal angst of being Muslim. Muslims are innocent bystanders caught between the mindless acts of brutal fanatics and the slobbering Islamophobes who revel in their mortification. Muslims have the greatest vested interest in eradicating the miscreants in their midst, for no less of a reason than that they are equal opportunity targets. Nothing could convey the horror that has been so deeply imprinted on the collective Muslim psyche than the innermost fear in the heart of a Muslim when he hears of an act of terror and he says to himself ‘ Please God let this not be the act of a Muslim’. Please think about this for a moment; it is as though if the heinous crime against humanity were perpetrated by a non-Muslim it would somehow find a mitigating circumstance. Think of it again, and again when a child of 8 utters such remarks, ‘Please God let it not be a Muslim’.

Notwithstanding our terrible anguish as Muslims, it is my duty as an American citizen to try and contextualize ‘terrorism’ and Islamophobia in relation to the other more imminent dangers we all face. It would be remiss, if not disingenuous of me, to ignore even the few I have selected.

The enormous trade deficit, the widening economic gap between rich and poor, joblessness, mounting educational debts, and the Supreme Court decision equating campaign contributions by corporations as equivalent to those of individuals, are the most ominous challenges to our democracy, menaced by a plutocratic takeover.

A disproportionate expenditure in the arms industry with a dysfunctional healthcare system, in which anything resembling Universal Healthcare, is stigmatized as ‘socialism’.

A predatory plunder of natural resources, leading to waste, environmental pollution and climate change, that intensifies the problems of global poverty, hunger, and starvation, in which we all have a stake.

Hate speech allowed to masquerade as free speech – a situation not helped by the concentration of power in the media that seem to be in lockstep in demonizing Islam, as it is in the dumbing down of America.

It is ironic that with the instantaneous mass communications network we have today, instead of moving forward to respect cultural diversity we are stepping back into the ‘Dark Ages’ of bigotry and malevolence. It just so happens that at the present time Islamophobia is center stage. The supreme irony in this saga is that not only did Thomas Jefferson study the Quran but with other key Founders also included Islam under the umbrella of religious tolerance!( Denise Spellberg).

Returning to the theme of my presentation, ’how does it feel as a Muslim to be viewed as ‘the other’ in today’s America?’ The answer is ‘terrible and scared’. But that does not give us the license to overplay the victim card. The real victims perished and their loved ones continue to endure the interminable pain. Perhaps we can all eke some solace from Ted Koppel’s reflections, ‘Will terrorists kill innocent civilians in the years to come? Of course! They did so more than 100 years ago, when they were called anarchists – and a responsible nation state must take reasonable measures to protect its citizens. But there is no way to completely eliminate terrorism’

The challenge that confronts us is how we will live with that threat. We have created an economy of fear, an industry of fear, a national psychology of fear. Al Qaeda could never have achieved that on its own. We have inflicted it on ourselves.

Over the coming years many more Americans will die in car crashes, of gunshot wounds inflicted by family members, and by falling off ladders than from any attack by Al Qaeda.’ That is Mr. Koppel’s perspective.

Finally though I speak as a Muslim and an American and I see nothing irreconcilable between the two, I speak foremost as an ordinary human being. While it is important to celebrate our cultural diversity, by rejecting, jingoism, racism, and xenophobia, we should remember and also celebrate our common humanity (William Theodore de Bary, 2013) and remember that we all share the same hopes and fears, have the same dreams for our children and grandchildren, and want to leave the world a better place for them than the one we inherited. The Golden Rule should be universal and not parochial in its application. This will only happen when we see the missing face on the ‘other’.

That we are different on the bases of our color, races, ethnicities, religions and languages is a Blessing from God. We are who we are and we must learn not only to respect but also to celebrate our differences. This does not mean that we all celebrate the same holidays, but we should be able to wish others well on their respective holidays. There are occasions on which we can all rejoice in the same holidays, but we should be able to respect the differences that prevent all of us from celebrating them in the same way. There are occasions when we need to salute the flag, sing the national anthem and swear the pledge of allegiance. We should all be able to join as one in such activities.

In conclusion I would like to shine a beacon of hope in this picture of gloom and doom I have painted. It comes from sources as diverse as the humanity it represents.

IN HONOR OF DIVERSITY of which Needham is an exemplary model, I END WITH THESE REMARKS: MUCHAS GRACIAS, AUF WIEDERSEHEN, PAX VOBISCUM!

3. What everyone knows about Islam and Muslims, Sheila Musaji, The American Muslim, June 23, 2012.

5. Pope Francis I Message to the Muslim World at the end of Ramadan, August 2013

12. Verses from the Quran