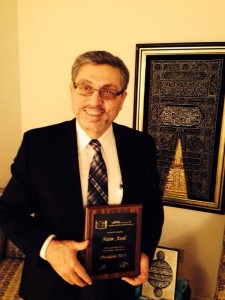 Thank you for being part of the Islamic Council of New England (Council) journey through 2013; we appreciate your participation & supporting our mission.

By the grace of Allah (swt), the Council has successfully delivered what we planned for a one day major event (the Annual Conference) on Sunday October 20th under the theme “Being Muslim in America: Challenges & Opportunities”. This success was culminated after the restless efforts by committed brothers and sisters during the few months ahead of the scheduled date of the conference.

Congratulations to the Conference Committee that included our youth students and Council leadership for pulling off this effort. You gave our community a source of great comfort that the future of Islam is in safe hands. An article was published in the New Age Islam website, about the success of the conference.

Glancing at the Council’s year in review, we’re reminded of how truly significant this past year was and how much we accomplished together with the grace of Allah (swt). One of the early defining moments of 2013 was when the Council was invited to be part of the interfaith organizing committee for the Boston Cathedral event after Boston Marathon’s tragedy on April 15th. At that day, Boston city suffered the horrific attacks on the Boston-Marathon, one of Boston’s iconic institutions. The council President Br. Naim Assil and Communication committee chair Br. Abdul Cader Asmal represented the Council in the interfaith committee that organized the service at the Cathedral of the Holy Cross “HEALING OUR CITY – AN INTERFAITH SERVICE “, during Presidents Obama’s visit on April 18th. Also, the council participated in the VIGIL at the ISBCC on April 23rd in memory of those injured and killed on Marathon day.

Responding to the Council’s concerns about the appearance of RobertSpencerat the annual Catholic Men’s Conference as a featured speaker at the DCU Center on March 16, the Roman Catholic Diocese of Worcester rescinded an invitation to Spencer, a Catholic whose work depicts Islam as an inherently violent religion.

The Council hosted Ramadan iftar (break fasting) reception at Islamic Center of New England in Sharon on July 18th and invited various figures from the interfaith partners community and the law enforcement personnel.

More defining moments for the Council came in the civic sphere. The Council celebrated Muslim Veterans day on November 11 that was organized by Br. Nabeel Khudairi. Certificates of recognition were presented to all the Muslim Veterans present or to their surviving relatives by Br. Abdul Cader Asmal for their distinguished services to their country.

A town hall meeting with US Attorney Carmin Ortiz was held at WIC in Worcester. This event was organized by sister Naseema Khan as a respond to the US Attorney request to meet with Muslim women.

Council’s President Br. Naim Assil attended the annual banquet of Muslim Coalition of CT on Nov 3rd in Hartford CT, and gave an award to MIT representative for offering free on-line course to the Muslim community.

Finally we sealed the year of 2013 by holding our annual Benefactors Banquet at ISBCC on December 7. This also was a successful event that showed the continuous commitment by our Benefactors and supporters.

These are just some of the Council’s defining moments of 2013. There are so many more accomplishments to be made over the next year inshaa’ Allah, but in order to continue this critical work; we need your renewed commitments & support.

Thank you for all what you have done in supporting this Umbrella organization, may Allah reward your efforts in this life and the hereafter. We pray that the upcoming New Year is a blessed time of renewed spirituality and closeness with Allah (swt).