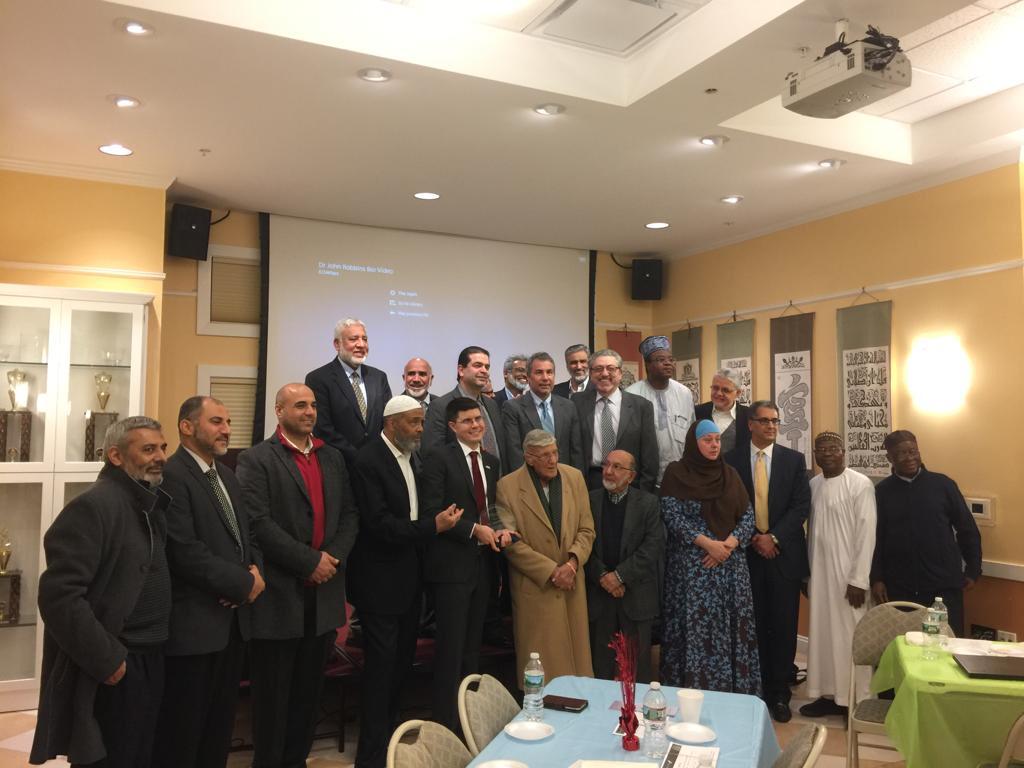 The Founder and the First President (1985) of

The Islamic Council of New England

A Fierce Advocate of Justice

Most befitting way to honor the legacy of a leader is to revive the purpose he lived for and strived.

The Epitome of Islam

“Allah commands you to deliver trusts to those worthy of them; and when you judge between people, to judge with justice…” [Qur’an, 4: 58]

Man has been created with an inspired sense of justice and a distinction between right and wrong: “And inspired it (soul with conscience of) what is wrong for it and (what is) right for it.” [Q, 91: 8]  Even the most unjust sleazy, when done wrong, yearns for justice; because it is rooted in human psychic. In essence, justice means equity, fairness, fulfilling the obligations, delivering the rights to their owners, or placing things where they rightly belong. Its applications, in spirit and practice, cover all aspect of individual and collective human endeavors and behaviors that also have implications for other species as well as the environment. The adherence to these essentials builds the capital of trust and confidence among various segments of the society that eventually transforms into healthy and balanced interpersonal and inter-community relations, security, and prosperity in all its relevant dimensions. These are some of the preliminaries for achieving peace and stability under which human civilization can continue to flourish. It is only when a society is morally resolved and determined to protect life, honor and property of all its members, and others feel safe from it as well, it qualifies to be called civilized.

In contrast, when human conduct is in violation of these essentials, ultimately a climate is fostered that erodes public confidence and trust and undermines society’s sense of security. The transgressors strike their blows at the very core that sustains individual and collective well-being of mankind. The aggressive pursuit of their selfish motives degrades human morality and social life, which stretches from relationships between individuals to those between nations.  This disruption of human nexus yields consequences akin to those resulting from the corruption of man’s moral and social order. Peace is replaced with the mischief of injustice and evil takes over the virtues. Those who spread this mischief on earth are indeed the worst enemies of humanity. They manage to cling to positions of authority to continue their evil practices.

It is important to recognize that the scientific and technological progress, with all its wonders, cannot be equated with modernity without a simultaneous and proportional refinement of human thinking and behavior. Comprehensively, modernity implies an increase in the level of sophistication and development of human society and, thereby, its enhanced ability to effectively cope with its contemporary, diverse and complex issues so that all its segments remain properly aligned and functionally coordinated. All available tools, including science and technology, must be utilized to facilitate the fulfillment of this central aspiration of the community of nations.

If unjust social, economic, and political practices are allowed to continue unchecked, however, common people soon begin to feel exploited, oppressed and persecuted by the privileged. These sentiments may solidify in the form of alienation, frustration and entrenched animosities; and may ultimately cause an eruption of unrest and violence at the expense of safety and stability of the society as a whole. This is a condition of chaos and disorder that Islam calls worse than killing: “…persecution is worse than killing …” [Q, 2: 191] It ought to be kept in mind though that killing in itself is most atrocious crime in Islam and is vehemently prohibited. Therefore, it is a collective responsibility of the people of goodwill, intellect and influence, and those who are in position of authority to take necessary steps to create conditions of justice and an environment of trust and stability in which people can live with a sense of peace and security. Only a painstaking hard and honest work to identify problems, that affect life, and dealing with them adequately can create such an environment. A sense of fairness, vision, and will are the essentials for any approach to yield desired results and bring harmony.

While the concept of justice is universally understood and appreciated, it is not always practiced with the same level of zeal and faithfulness. Humanity’s most agonizing tragedy is that its very curators have robbed it off of its most valued treasure. Historically, the big and the powerful are too often hypocritical in their commitment to justice. In the fervor of advancing their selfish objectives, usually they adopt the doctrine of belligerency against the weaker in the name of justice. They insult the intelligence of people by projecting to have the monopoly on the truth and righteousness.

Islam, on the other hand, primes justice with another layer of protection and pleasantness: “Surely Allah enjoins justice, kindness and the doing of good to kith and kin, and forbids all that is shameful, evil and oppressive…” [Q, 16: 90]  This directive succinctly enjoins three principles, which consolidate all elements necessary for structuring human unison. Justice comprises of two independent layers of truth: that there be a balance and right proportion among human beings in respect to their rights, and that every person be granted his or her right without any distinction or selectivity. Benevolence, which broadly embraces all such good acts as politeness, generosity, giving more than what is due, and being content with less than what one is entitled to. This principle goes a step further than justice itself, and is, in some respect, even more important than justice. If justice is the foundation on which the structure of the society rests, then benevolence represents its finishing and perfection. Justice wards off the bitterness of discord in human relations, and benevolence adds to them the elements of sweetness and bonding. The first beneficiaries of one’s benevolence are one’s own family members and relatives then distant others, stretching to the entire community.

For Muslims it is not enough to practice justice in their own dealings; it is their social responsibility to have a broader vision of justice and strive for its triumph and do all within their reach to ensure that evil is replaced with goodness and injustice yields to equity and fairness. The Islamic terminology for this process is Jihad – a noble but most misconstrued charter of Islam. Essentially, Jihad means pursuit of moral excellence and a continuous improvement in personal conduct with favorable and measurable impact on social, economic and political well-being of the society. Its intended objectives include constructive reforms; social, economic, legal, and political justice; freedom of religion and speech; and peace for all with protection of life, property, and honor.

This process should continue through modes of persuasion, dialogue and intellectual discourse. Only when absolutely necessary, legitimate authorities may use proportionate force in the interest of common good, or defensive purposes, or to protect the oppressed. But, before a person embarks on this course, he must first recognize the Sovereignty of Allah swt, subject himself to His code of conduct, and do all such good deeds sincerely for the sake of Him alone, and not for any other motives. This explains why the personal refinement and resisting the temptations of own-soul is called the major jihad in Islam of higher order.

The scope of social justice and reforms is not limited to just a Muslim community, but extends across all boundaries. Muslims are clearly instructed: “O Believers, be steadfast in righteousness and just…, and let not hatred of any people provoke you to turn away from justice…” [Q, 5: 8]  That is, justice is an absolute necessity and its standards are not adjustable to the considerations of time, location, circumstances, perceived interests, or the parties involved. They are forewarned against the evils, which had afflicted some of the previous nations. One of the fundamental mistakes that lead to the degeneration of a nation is to hand over positions of trust and power to incompetent, immoral, dishonest, and corrupt people. They corrupt the society in turn. The other major weakness that nations have suffered from was a loss of their sense of justice. In their pursuit of either personal or national interests, honesty and good faith were often sacrificed. Muslims are put on alert not to commit similar mistakes of unjust practices. They must rather declare what is right in the face of friend and foe alike, and judge between people with complete fairness and transparency.

In a broader sense, justice is a part of the faith structure of Islam. It is the most important article of faith, known as the A’khairah (Day of Accountability/Judgment). Without the force of belief in Akhairah, all other articles of faith have little or no impact on human thinking and behavior. The Day of Judgment will be held for accountability so that people could be brought to justice in accordance with their personal conduct on earth. The concept of performance evaluation is basic to all our segments of life; otherwise, we cannot exist as a functioning society. In a larger context, without accountability, life has absolutely no meaning, which is absurd to human intelligence, to say the least. Islam emphasize that man has a purpose and it is this very purpose that makes him superior to all others. Further, this life will continue beyond the existing one, and the entire human race will appear before the Creator to face a day of judgment. Individuals’ conduct in the present setting only will determine their eternal success or failure in the Akhairah.

In brief, man is here for a predetermined span of time to pass a test: “He it is Who has created life and death that He may test you, which of you is best in conduct…” [Q, 68: 2]. Everything in this universe is for his service to enable him to pass that test: “Surely, We have made all that is on the earth an embellishment for it in order to test people as to who of them is best in conduct” [Q, 18: 7] Specifically, the test of man is how he consciously exercises his freedom of choice by utilizing his given faculties, capabilities, and vast resources placed at his disposal. It is to be seen whether he considered himself accountable to his Creator and acted justly or he defiantly betrayed the trust of freedom placed in him. The underlying purpose of Akhairah is to render justice to people for their efforts either toward the establishment of a just society or toward its ruin: “And do not make mischief in the earth after it has been set in order….” [Q, 7: 56]

Dr. Khan is Professor of Operations Research at the University of Massachusetts Lowell