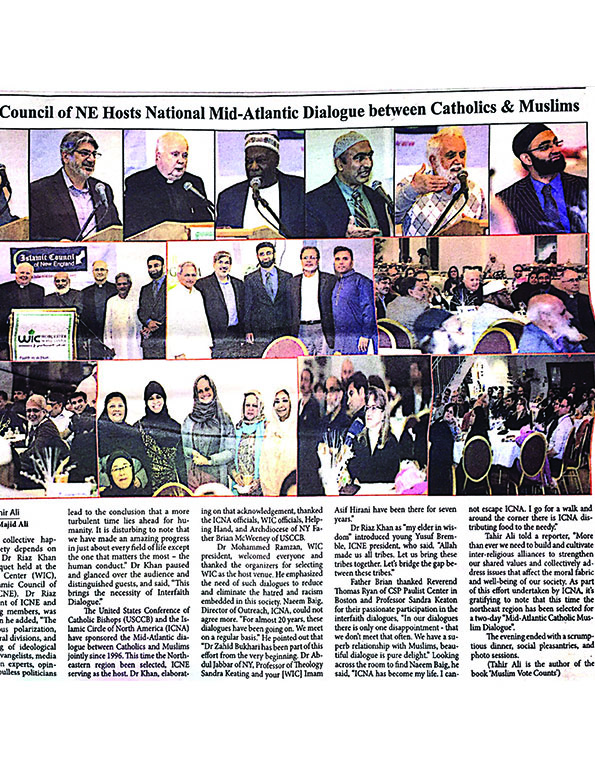 The predicament of Muslims in America is the same that grips them all over the world simply because the root cause of the problems they face is the same. They are disarrayed here just as anywhere else. Each Muslim country in the world functions in total indifference to other Muslim nations and they all pursue diverse and often conflicting interests. The within and across divisions, created by their narrow visions, selfish motives, and despicable behaviors, provide golden opportunities to those who are eager to exploit them.

Likewise, each Islamic center in America acts like an independent state. Each is wrapped up in its own activities and expansionist projects. There is a total disconnect across Muslim communities in the nation with near zero communication or coordination. The Islamic Council of New England (ICNE) was founded with this concern to facilitate a connection and link up the Islamic centers and organizations to become an effective and unified voice of Islam in the region.

A part of this undertaking are the community outreach initiatives and building interfaith alliances as a priority or support them wherever they exist. In a pluralistic and multi-faith society, particularly, community engagement and reaching out to the followers of other religions is not an option for Muslims but an Islamic obligation (see, for example, Qur’an, 3: 64, 104, 110; 8: 24-25).  Islam requires that we contribute to the wellbeing of the society and its moral health. There is a command that we must support each other in noble causes that promote goodness. Our tradition is one of tolerance and discussion with other faiths in a healthy and collaborative manner. We must debate in common terms the issues that relate, for example, to increasing violence, drug, decaying family structure, social justice, and public safety. We ought to listen to others’ views before presenting ours by adhering to certain universal standards of engagement. If we aspire to have any moral stand in the society, it would be necessary for us to join forces of moral conscience, rational thinking, influence, and vision to redirect the society. We may not convert each other or visit each other’s places of worship, but we must stand unified in solidarity to protect the social institutions and values that safeguard the moral integrity of the society.

The Mid-Atlantic dialogue is co-chaired by Archdioceses of New York and ICNA, and is held annually in October. The current co-chairs are Fr. Rev. Brian E. McWeeney, Archdiocese of New York, and Naeem Baig, ICNA Director of Outreach and Interfaith Initiatives.

The 2018 Mid-Atlantic Catholic Muslim Dialogue in October at WIC was sponsored by ICNE, ICNA-New England Chapter, and the Helping Hand for Relief and Development USA. The topic of discussion was “Prophet Moses.” Research papers were presented by Shaykh Abdool Rahman Khan (ICNA) and Fr. Brian McWeeney (USCCB). The other participants who contributed to the dialogue included: from ICNA, Naeem Baig, Dr. Khurshid Khan, Tariqur Rahman, and Dr. Zahid Bukhari; from USCCB, Fr. Elias Mallon; from WIC, Imam Asif Hirani; from (HHRD), Humayun Kabeer; and from ICNE, Naim Assil, Dr. Naseema Khan, and Dr. M Riaz Khan. Also in attendance were Imam Dr. Abdul Jabbar, Dr. Sandra Keating, and Fr. Thomas Ryan (Paulist). Scholarly presentations were followed by lively interaction and exchange of views by members from their respective religious perspectives.
The event reached its climax in the evening of October 2nd when ICNE hosted a banquet dinner in honor of over 120 community leaders and distinguished guests from across New England. Representatives of the participating organizations addressed the gathering and shared their reflections highlighting the need and significance of civic engagement and interfaith coalitions for the betterment of the society. The two-day dialogue was fully covered by the local media.