Home Uncategorized Stand with the Prophet

Stand with the Prophet 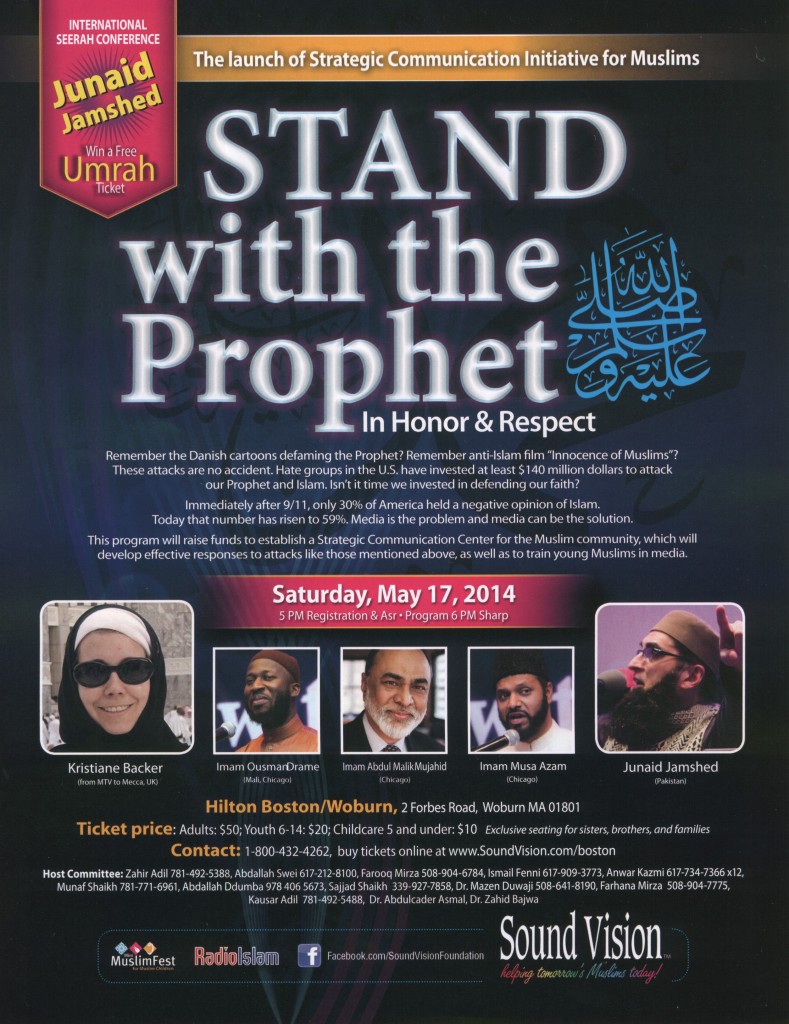 Frustrated with Islamophobes defaming the Prophet?

Fuming over extremists who give bad name to Islam?

Or the anti-Islam film, “Innocence of Muslims”?

Hate groups in the U.S. have invested at least $140 million dollars to attack our Prophet and Islam. Isn’t it time we invested in defending our faith?

Join Sound Vision’s ground-breaking International Seerah conference for the first time in Boston, MA, “Stand with the Prophet in Honor and Respect” on May 17, 2014, to be part of the solution!

This is not an event. It is the beginning of a movement. A movement to defend Prophet Muhammad, his person, and his message. Salla Allahu Alaihe wa Sallam.

This conference will raise funds to establish a Strategic Communication Center for the Muslim community, which will develop effective responses to anti-Islamic attacks, as well as to train young Muslims in media.

— Sr. Kristiane Backer is a n award-winning TV presenter, an author, a journalist, a voice over artist and an interpreter based in London with a pan-European career. In 2012 Kristiane published her best- selling memoir “From MTV to Mecca”.

— Junad Jamshed is a Pakistani recording artist, television personality, and fashion designer. Junaid first gained nationwide prominence and international recognition as the lead vocalist of the pop-rock, Vital Signs band, in 1987, when he took Pakistan’s media by storm with the hit patriotic song “Dil Dil Pakistan”. This was a turning point in Pakistan’s music history. In 2004, Junaid renounced his mainstream music career, and since then, he has focused on sharing Islam through his beautiful Nasheeds. To date, Junaid has published 7 enchanting spiritual albums. Junaid Jamshed has also been named by “The Muslim 500” as one of the “World’s Most Influential Muslims” for the year 2012.

— Khalid Mehmood, originally from Pakistan, is Nasheed artist based in New Jersey, USA. He performs Nasheeds and does Dawa’h work within USA, Canada and Pakistan. Recently he been performing at Islamic events with Junaid Jamshed, Amjad Hussain and Sheikh Hassan Abu Nar across USA and Canada. Khalid has also appeared on Pakistani TV channels like ARY Digital, QTV, GEO and ARY Zauq. He holds a Master degree in Management Information System and an MBA in finance from USA.

— Imam Ousmane Drame of Mali is a graduate of Madinah who gives khutbas in four languages. He is the Imam of Masjid Al Farooq, Southside Chicago, IL.

— Imam Abdul Malik Mujahid is President of Sound Vision, the Chair of the Parliament of World’s Religions, Chair of Burma Task Force USA, a coalition of 19 national organizations of Muslims.