REPORT ON THE FILM JERUSALEM 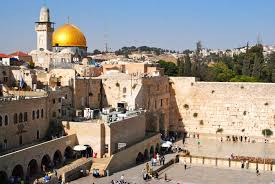 In late 2013 Laura Everett, Executive Director of the Massachusetts Council of Churches, met with members of the Islamic Council of New England Interfaith Committee and with Father David Michael of the Archdiocese of Boston to plan various interfaith activities for the upcoming year.

The objective was also to co-sponsor an interfaith event that was not necessarily a response to a crisis or a serious provocation to our beliefs, but more of a mutual recognition of each other as friends and allies. Laura recommended the opportunity to share in a presentation of the film “Jerusalem”.

Through their various connections the Massachusetts Council of Churches was able to secure the film with Museum of Science in Boston hosting the event, and also arranged for a Question & Answer session with the filmmaker Daniel Ferguson, and moderated by Charlie Radin who was former Boston Globe Middle East Bureau Chief.

In addition to the Massachusetts Council of Churches the event was also co-sponsored by the Islamic Council of New England and Temple Israel of Boston, the funds collected being used to defray the cost of snacks and an informal get together after the film show and discussion.

With the opportunity for each faith group to invite up to 100 attendees, the Islamic Council of New England extended an invitation to all the Muslims of greater Boston of which 70 confirmed their attendance. On the actual day of the event, about half those who accepted the invitation actually came.

The actual film was a historical guide through the four quarters of Old Jerusalem as experienced through the lives of three teenage girls from the Muslim, Jewish, and Christian faiths. The film did not gloss over the reality of how each of the followers of their faith experienced a close relationship with the city but an tenable degree ( please clarify Br Nabeel)of coexistence with those from other faiths.

The discussion following the film provided a realistic review of how life is for the residents of the city compared to the charmed view of the city that many visitors have. The lesson felt by many was how fortunate we as Muslims and followers of other faiths are to enjoy our religious coexistence in the United States and how we can serve as role models for coexistence in one of the holiest cities to the three Abrahamic faiths.

The evening created many gratifying opportunities for our interfaith dialogue to continue and reminded the participants to appreciate and encourage the value of our religious freedoms.”
Nabeel Khudairi
Co-chair of Interfaith Dialogue, Islamic Council of New England